You are here: Home » Misandry » Complaint against male abuse in Asian Paints Damp Proof advertisement -advertiser advised by ASCI to modify or remove it

People who had complained to Advertising Standards Council of India (ASCI) against Asian Paints Damp Proof Advertisement at this youtube link have received final confirmation email from ASCI that their complaint has been upheld. 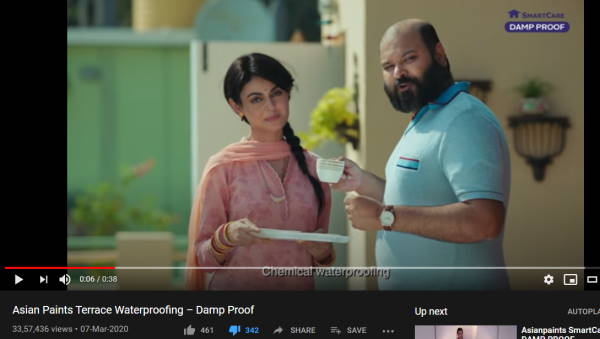 While there is good likelihood that the advertisement will be modified or removed, but one should also read the fine print which says that the role of ASCI in the matter is of persuasion to advertisers, and it is not mandatory that the advertiser has to follow the advice given by ASCI.  Basically, ASCI is a self-regulatory body and not a governmental organisation.

Here is text of one of the complaints which describes the main problems with the advertisement:

Asian Paints Damp Proof advt where a kind of competition is shown between two neighbours trying to water proof their roofs.  The ‘smart’ neighbour is shown using Asian paints product, whereas the ‘buffoon’ husband is shown using some generic chemical waterproofing product.  The problem is in the domestic violence – both physical and verbal which is inflicted on husband by wife, just in trying to make a point about asian paints product.

This advt has the following problems:

Complaint upheld by ASCI – their reply and conclusion

The email text below gives the details of both reply from Asian Paints (Advertiser) to the complaint, and assessment and conclusion of Consumer Complaints Council (CCC) of ASCI which upheld the complaint.

Do read further analysis which is given after the email text below.

Text of email below:

Re: CCC Recommendation–2004-C.7(28) – Your complaint against the advertisement of “Asian Paints Ltd. – Asian Paints Damp Proof”

The complaint was considered by the Consumer Complaints Council (CCC) at their meeting.

The advertiser in their response submitted that a humorous tone was adopted in their advertisement to communicate their brand / product benefits. At the beginning of the advertisement, the woman has served tea to her husband and is happily smiling when her husband responds to his neighbour that he is undertaking chemical water proofing. Further, the advertisement showcases the husband and wife going through their life journey while continually facing a problem of seepage. As in a natural relationship, she seeks her husband’s attention by turning his face towards her while he is speaking to their neighbour. Once she has expressed her concern to him, she turns his face back towards their neighbour for him to continue their conversation, one which she had originally interrupted. To the advertiser, this was a normal interaction devoid of any violence / mal intent between the couple and not at all a slap as alleged by the complainants. At the end of the advertisement, it is seen that when the husband applies Asian Paints – Damp Proof both husband and wife happily dance together in the rain.

The CCC did not agree with the advertiser’s contention that the situation was depicted in a humorous manner. The CCC further observed that the woman’s face in the advertisement portrays anger, grimacing and is not light-hearted as asserted by the advertiser. The wife’s action results in the baby getting scared and starts to cry as well. The CCC did not agree with the advertiser’s submission that the wife’s act was meant to catch the attention of the husband. It depicted a much more serious tone that not only was demeaning and disrespectful in nature but also resembles the act of slapping thus normalizing violence. The CCC agreed with the complainant’s feedback that if a similar situation was depicted by reversing the gender, the advertisement would have been considered to be in contravention of Chapter II of the ASCI code. In the context of the advertised product, the objected visuals could have been easily avoided.

READ:  BBC and Western MSM gear up with focus on India rapes before International women’s day

Based on this assessment, the CCC concluded that the TVC and the YouTube advertisement contravened Chapter III of the ASCI code. The Complaint was UPHELD.

We have advised the advertiser to suitably modify or withdraw the said advertisement by May 27, 2020. If you continue to see the advertisement with the objected visuals being published beyond the due date, kindly bring this to our attention.

You may note that while ASCI believes in persuasion to ensure compliance by advertiser, in case of continued non-compliance, alternate remedies are also available to complainants to approach other appropriate forums such as State Consumer Forum or National Consumer Disputes Redressal Commission (NCDRC).

Thank you for having referred this complaint to us.

Assuring you of our services in the pursuit of Self-Regulation in Advertising.

Analysis of ASCI Code and guidelines

The text above is quite detailed and self-explanatory.  Further to that, let us try to go deeper to understand for future as to what specific violations of ASCI guidelines were deemed to be violated by above advertisement – specifically Chapter II and Chapter III of the ASCI Code (PDF Download).

The Chapter II of ASCI Code contains all but one para, which is given below (text format is not available):

I think the act of slapping husband/father in front of a child who starts crying upon seeing it, while a neighbour is also watching – can very well fit into category of being offensive to generally accepted standards of public decency.

Further, the CCC has upheld the logic given that if an advertisement showed similar physical violence against a woman, it will raise an outcry.

Chapter III of the ASCI Code has many more paras, but in my analysis the most relevant points into which the violations done by Asian Paints advertisement can fit is the first para itself 3.1 (a): 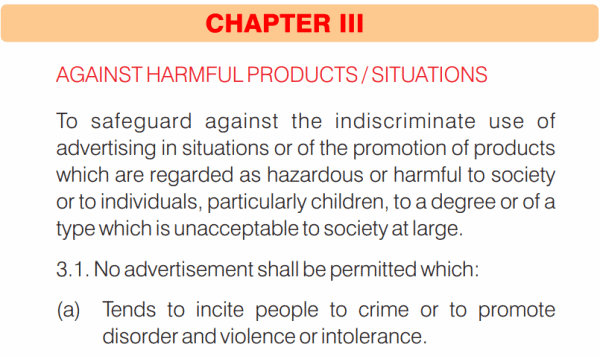 3.1 No advertisement shall be permitted which:

(a) Tends to incite people to crime or to promote disorder and violence or intolerance.

The act of slapping husband/father shows both violence and intolerance in the advertisement – and doing these in front of a child and also a neighbour can very well be deemed to be something which is promoting such behaviours, too.

One can download and study the ASCI Code in detail to understand what kind of advertising guidelines and conduct should be followed by advertisers when they create advertisements.