You are here: Home » Uncategorized » Truth is out: ‘Braveheart’ Rohtak sisters are third rate bullies and extortion racketeers

The Rohtak sisters Pooja and Arti Kumar who became national sensations by standing up to few boys who ‘molested’ them are now getting shredded as more videos and eye-witnesses’ accounts come to light.

Update Feb 27, 2015: As I had already asserted, the polygraph tests were done to protect the Rohtak sister duo, and that’s exactly how the case is turning out to be.  If the lie-detector tests had gone in their favour, then they would have splashed it in media.  Now that it went against the duo, you tell the world that lie-detector tests are not reliable.

Following are the earlier news stories in 2 parts when the Rohtak sisters were being lionized as bravehearts:

Following is first video published on Dec 3, 2014  which got the reporting from actual passengers of the bus (most crucial evidence), and others from boys’ village.   It tells the real story by eyewitness passengers who had travelled on the same Haryana roadways bus and they all claim that it was the girls who had started the argument over seats which led to heated arguments before the girls started hitting the boy. Watch the video below which has interviews with many old ladies who were actual passengers on the bus. All of them say that it was the girls who started the fight and boys never molested them.

Updated 13 Dec 2014: The Second (final) video published on Dec 10, 2014 (also by Deepika Bhardwaj) is given below, which has interviews by people who have been victims of the not only the same sister duo but their whole family in the past!   Surprise surprise, the gene of bravery runs in the whole family of sisters Aarti and Pooja, and their father Rajesh Kumar and his lovely wife!  Bravery in the form of extorting Rs 8000 from a boy, threats of false rape/molestation on another boy Sumit, an actual kidnapping case filed by Rajesh Kumar’s wife to ‘settle’ 1 lakh loan, more than 5 lakh of loan not paid back by way of threat of rape/molestation case by wife, and so on.  The list just goes on and on…

Funny thing is one of sisters now claims that she has been harassed by 2000 boys so far!  If one assumes that she gets harassed by 1 boy every day, then simple calculation shows that this must have been going on for five and a half years!  She is 19 years old now, so it must have started when she was thirteen and half years of age!

That the girls are professionals at making false claims can be seen in their statements like below:

Then, after they sat down, Aarti claimed, the two started making fun of them, saying the girls were “not fit to sit on the seats” and should rather occupy the floor.

The ardha-satya or half-truth above is that the fight started due to the seats, but the full truth is that no boy ever passed any comment on them and it was they who demanded to sit on particular seats.

READ:  Supreme Court upholds decision of HC for daughter in law to pay rent to mother in law 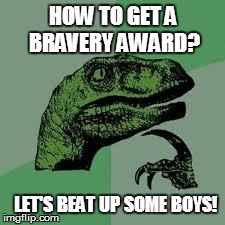 The real heroes are Rohtak boys who are being hounded by media, and their only fault was that they stood up against the gunda-gardi’ of the two Rohtak sisters who seem to do their cookie cutter ‘bravery acts’ almost every month with precision regularity, and seem to have great allergy to people sitting peacefully somewhere! In the second video too which has emerged, they seem to be attacking a young man sitting on park bench and there seems no physical provocation from that young man.

Not only the bus passengers, people from the girl’s own village are saying that the sisters had extorted money from another boy’s family in a similar way earlier.  The figure being quotes is anywhre from 35 – 50K.  Such news is also circulating on social networks that they are in habit of not paying money to shopkeepers in own village, and they threaten about filing a molestation case if asked to pay up.

These sister are nothing but professional scam artists who attack young men, get a video made, and create it into molestation incident, and then extort money.

They should be prosecuted instead of given awards!  Unfortunately the high emotionalism that runs in this country means that few political leaders will announce awards and sing praises the moment any news is released.

Haryana Chief Minister ML Khattar has announced a cash reward ofRs. 31,000 each for the women. The sisters will also be honoured with an award by the government on Republic Day.

Talking of awards on Republic Day, one more scam has emerged that a previous 2013 awardee of ‘brave girl’ award on Republic Day was found to be a fraud story.

Malaika, a class XI student, was honoured with the prestigious Geeta Chopra Award on Republic Day this year for fighting and foiling an attempt by four persons to kidnap her in February, 2013

In a report submitted to a local court in Jaipur in December last year, the police had said that the incident “did not occur” and the case as “false”.

The police relied on CCTV footage from a computer shop located near the spot where the alleged incident took place on February 15, 2013. – See more at: http://www.hindustantimes.com/india-news/jaipur-fresh-probe-debunks-bravery-award-winner-s-kidnap-bid-claims/article1-1292925.aspx#sthash.C0sX3ILq.dpuf

It is high time that media and politicians stop looking for some fake braveheart girls to give them awards to.  The politicians are doing it to deflect criticism about their performance, while the scam artists and false accusers are having a field day getting public sympathy due to one sided media coverage.  Thanks to social media, the truth of these ‘braveheart’ Rohtak girls is for all to see now.

Please sign this Change.org petition to prosecute the 2 Rohtak sisters for making false accusations.  Why should you sign it?:

1. Politicians are not going to stop false cases.  They are busy looking for the next Jhansi ki Rani even when all the evidence is to the contrary.

2. Main Stream Media (MSM) has shown their clear inclination that they are all inspired by similar agenda as the politicians: to confirm that someone is braveheart, you immediately  spread the news and label the accused as molesters, rapists etc depending on the allegations made.  Splash the photos of accused everywhere, but morph the faces of accusers because their identities need to be protected!  And with great reluctance and sheepishness, give the other side of story only AFTER it has become clear that if MSM doesn’t show the true picture now, the people will anyway find it on social media like Facebook, YouTube, Twitter etc.  And continue to rant and rave about protecting women.  How exactly will women be protected when the false accusers get all the time and attention from police, authorities, courts?  Media doesn’t want to go into these uncomfortable questions.  Maybe it’s beyond their mandate, or even competence!