As per this recent tweet by current Chairperson of NCPCR (National Commission for Protection of Child Rights), they will not look into any issue related to child custody irrespective of whether there is a child custody case pending in court or not. 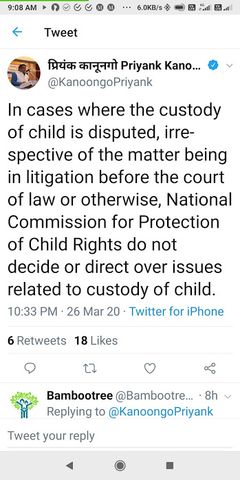 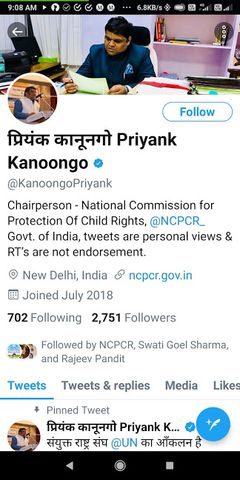 As to what are the roles of NCPCR, we should look at the legislation how it came into being.  This is a government body created through legislative act called The Commissions For Protection Of Child Rights Act, 2005.

I could find the preamble of the above act only in the official Gazette PDF of the bare act known as The Commissions For Protection Of Child Rights Act, 2005 (click to download).  In other online sources, preamble is missing.  Let’s have a look at the preamble below: 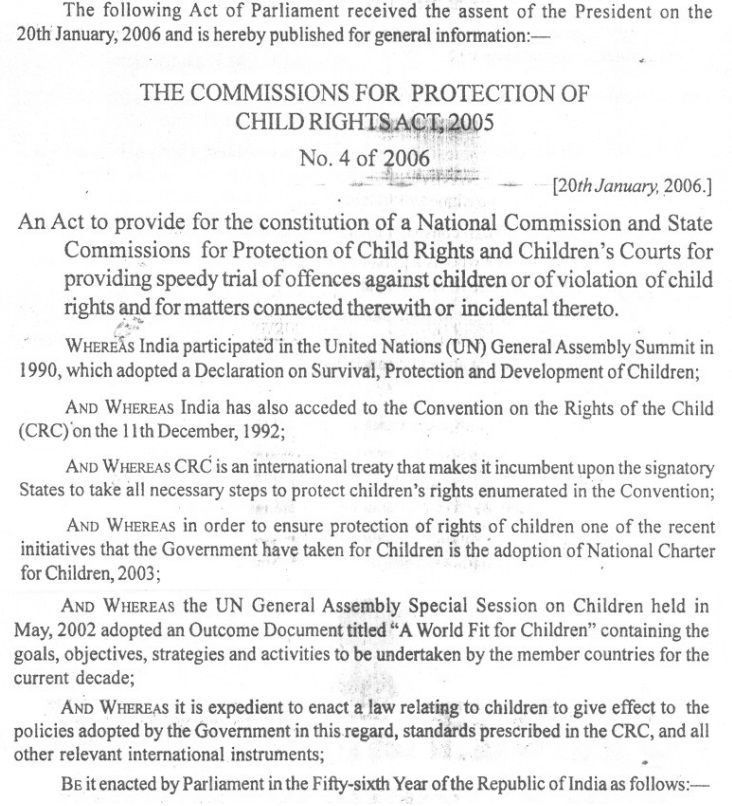 From the preamble, it is clear that a main mandate of National and State commissions under this act is to protect child rights, and it also draws its legislative intention also from United Nations Conventions on the Rights of the Child (UN CRC) to which India has acceded.  Also, there is mention of National Charter for Children, 2003.  That is also something to be looked into.

Some important paras of UN CRC are also mentioned in this earlier post on the blog:

The relevant para from UN CRC for the purpose of this post is as follows:

Article 9 of UN Convention on the Rights of Child (UN CRC):

1. States Parties shall ensure that a child shall not be separated from his or her parents against their will, except when competent authorities subject to judicial review determine, in accordance with applicable law and procedures, that such separation is necessary for the best interests of the child. Such determination may be necessary in a particular case such as one involving abuse or neglect of the child by the parents, or one where the parents are living separately and a decision must be made as to the child’s place of residence.

2. In any proceedings pursuant to paragraph 1 of the present article, all interested parties shall be given an opportunity to participate in the proceedings and make their views known.

3. States Parties shall respect the right of the child who is separated from one or both parents to maintain personal relations and direct contact with both parents on a regular basis, except if it is contrary to the child’s best interests.

Since India has ratified UN CRC, and this act clearly states need to adhere to UN CRC, then it is clear from above paras that it one role of the National and State commissions (NCPCR and SCPCRs) can have jurisdiction and a role to look into cases where a child is separated from one or both parents, except of course if a child custody related case is pending already in court.

However, NCPCR chairperson has clearly said that they will play no such role!

Type of Complaints and Issues being handled by NCPCR

Before we try to make a government department work into some area which is not their focus, it’s also good to know what areas or problems they are focusing on.

State/UT-wise Complaints Received in NCPCR Regarding Torture including Abuse and Sexual Exploitation of Children in the CCIs/Shelter Homes from 2016-17 to 2018-19 (From : Ministry of Women and Child Development)

State/UT-wise Complaints received in National Commission for Protection of Child Rights (NCPCR) from 2015-16 to 2017-18 (From : Ministry of Women and Child Development)

State/UTs wise details of Complaints regarding ‘Child abuse/neglect of children in CCIs’ received in NCPCR from 2015-16 to 2018-19 (From : Ministry of Women and Child Development)

State/UT-wise Details of Complaints Pertaining to Corporal Punishment Received in NCPCR under the RTE Act, 2009 from 2014-15 to 2016-17 (From: Ministry of Human Resource Development)

Let’s also look at some of the recent news reports and press releases related to NCPCR and SCPCRs.

The Commission visualizes a rights-based perspective flowing into National Policies and Programmes, along with nuanced responses at the State, District and Block levels, taking care of specificities and strengths of each region. In order to touch every child, it seeks a deeper penetration to communities and households and expects that the ground experiences gathered at the field are taken into consideration by all the authorities at the higher level. Thus the Commission sees an indispensable role for the State, sound institution-building processes, respect for decentralization at the local bodies and community level and larger societal concern for children and their well-being.

As per above press release, if Child rights commission “seeks a deeper penetration to communities and households”, then what stops it from looking into child custody related issues (not pending in court) which also very much emanate from households!

Children from all sections including street children, schools, child care institutions, children homes, hostels or any other place where children take education/ training or reside etc. can make their complaints/representation before NCPCR.

Above seems to suggest their focus is more on poor children, orphaned children, children living away from parents due to poverty, and so on.

Activists, lawyers, academicians and many others have written collectively to the National Commission for Protection of Child Rights (NCPCR) asking it to counsel its own top brass on the law from which it derives its powers as well as international covenants it was created to safeguard instead of issuing orders to ‘identify’ and ‘counsel’ children at the site of anti-CAA protest in Shaheen Bagh here.

From the points mentioned in above news report, the letter written by these left-liberal type activists seems to be a bigger joke, but it is still pertinent to note that NCPCR had the time and inclination to check upon well-being of children being taken to Shaheen Bagh protest in New Delhi, but they don’t have time or inclination to look at child custody related issues all over India!

NEW DELHI: In an effort to reach out to children facing violence and abuse, the National Commission for Child Rights (NCPCR) has decided to conduct special visits and set up separate benches at the district level to directly hear cases and representations on issues related to violation of child rights.

The Juvenile Justice Act (2000) mandates state governments to establish Child Welfare Commitees (CWC’s) at the district level to address such issues at the state government level. However the issue of sexual abuse of minor girls at a foster home in Bihar’s Muzaffarpur and the findings of an NCPCR survey released last year revealed the need for strengthening CWC’s and the foster care system.

So while above indicates that NCPCR will not look into issues like child custody, as a statutory body, what stops them from giving feedback to lawmakers and government regarding child custody issues being faced by non-custodial parents, especially fathers; so that the child custody laws can be amended, especially keeping in mind the recommendations made in Report number 257 of the Law Commission of India to allow for Shared Parenting and Joint Custody in Indian custody laws.

If there is any doubt regarding above assertion, following para from their own press release should clear all doubts.

The National Commission for Protection of Child Rights (NCPCR) was set up in March 2007 under the Commission for Protection of Child Rights Act, 2005, an Act of Parliament (December 2005). The Commission’s Mandate is to ensure that all Laws, Policies, Programmes, and Administrative Mechanisms are in consonance with the Child Rights perspective as enshrined in the Constitution of India and also the UN Convention on the Rights of the Child. The Child is defined as a person in the 0 to 18 years age group.

The Commission’s Mandate is to ensure that all Laws, Policies, Programmes, and Administrative Mechanisms are in consonance with the Child Rights perspective as enshrined in the Constitution of India and also the UN Convention on the Rights of the Child.

So given both Constitution of India and UN CRC are in line with and mandate for welfare of children, and allowing for child to have access to both parents; NCPCR can very well recommend to lawmakers about need for amendment to child custody laws to allow for Shared Parenting and Joint Child Custody.

In Next posts, I will share replies to few RTIs from NCPCR which will give more insights into their mode of working and thought process.