Following notification has been posted on Ministry of Women and Child Development for comments from public on Draft National Child Protection Policy. 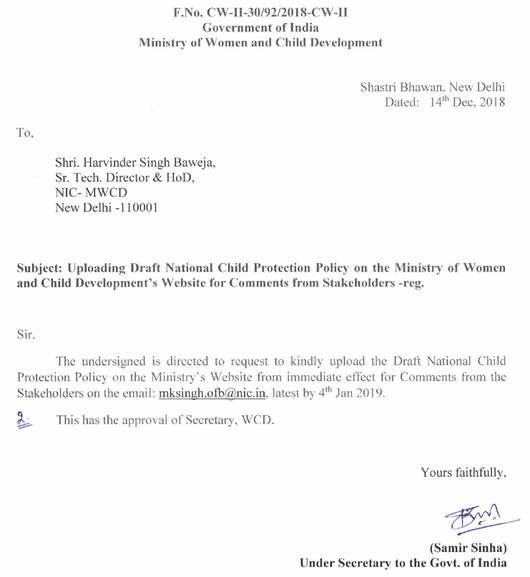 Draft of the National Child Protection Policy can be downloaded from below:

Following are some examples of feedback and comments which can be given on the same and sent to mksingh.ofb@nic.in (latest by 4th Jan 2019).  One should give one’s full name, address, mobile number, and email along with the comments sent by email.

Due to rising separation and divorces in India, many children – whose parents are living separately or divorced already – are being made to suffer due to restrictions being placed on children’s access to or being entirely cut-off from the non-custodial parent.  Many a time institutions like school where a child goes to are made to act against child’s best interests on request of a custodial parent.  To avoid any schools and other child institutions aiding or abetting in cutting-off a child’s access and interaction with non-custodial parent, whether inadvertently or deliberately, appropriate guidelines need to be formulated regarding the same.  Since the draft of National Child Protection Policy (POLICY) mentions about India being signatory to the United Nations Convention on the Rights of the Child (UNCRC), it would be pertinent to give excerpts of some of articles from UNCRC below, followed by suggested additions to the draft of the POLICY:

United Nations Convention on the Rights of Child (UN CRC) has been referred from web page below: https://www.ohchr.org/en/professionalinterest/pages/crc.aspx

Article 8 of UN Convention on the Rights of Child (UN CRC):

1. States Parties undertake to respect the right of the child to preserve his or her identity, including nationality, name and family relations as recognized by law without unlawful interference.

It has been seen that in cases of marital disputes where the parents of children are living separately or divorced already, the children are cut off from the Non-Custodial Parent (NCP).  Often times, it has been seen, that the Custodial Parent (CP) makes efforts to change the name (first name or surname) of the child in child’s school records, without any such court order or without any intimation to the NCP.  Such a change of identify of child is against Article 8 of UNCRC as mentioned above which mandates on signatory states to preserve child’s identity including name and family relations.

1. A school or institution shall not change name of child in school records merely upon application from a Custodial Parent, unless the said custodial parent has full guardianship of child as per a court order.

2. A school or institution should notify both parents as per school records, in case of any application or attempt is made to change a child’s name or identity in school records by child’s parent.

Article 3 of UN Convention on the Rights of Child (UN CRC):

READ:  How to draft a child custody (GWC) petition

1. In all actions concerning children, whether undertaken by public or private social welfare institutions, courts of law, administrative authorities or legislative bodies, the best interests of the child shall be a primary consideration.

Article 5 of UN Convention on the Rights of Child (UN CRC):

States Parties shall respect the responsibilities, rights and duties of parents or, where applicable, the members of the extended family or community as provided for by local custom, legal guardians or other persons legally responsible for the child, to provide, in a manner consistent with the evolving capacities of the child, appropriate direction and guidance in the exercise by the child of the rights recognized in the present Convention.

Article 9 of UN Convention on the Rights of Child (UN CRC):

1. States Parties shall ensure that a child shall not be separated from his or her parents against their will, except when competent authorities subject to judicial review determine, in accordance with applicable law and procedures, that such separation is necessary for the best interests of the child. Such determination may be necessary in a particular case such as one involving abuse or neglect of the child by the parents, or one where the parents are living separately and a decision must be made as to the child’s place of residence.

2. In any proceedings pursuant to paragraph 1 of the present article, all interested parties shall be given an opportunity to participate in the proceedings and make their views known.

3. States Parties shall respect the right of the child who is separated from one or both parents to maintain personal relations and direct contact with both parents on a regular basis, except if it is contrary to the child’s best interests.

It has been seen that in cases of marital disputes where the parents of children are living separately or divorced already, the children are cut off from the Non-Custodial Parent (NCP).  Often times, it has been seen that the Custodial Parent (CP) writes letter or verbally represents to child’s school so as not to allow NCP to be able to contact or talk to child inside school premises or even outside school premises.  Also requests are made by custodial parent to not provide any information to NCP about child’s educational performance, extra-curricular activities, and progress at school, and the such requests are routinely allowed by the school or institution.  Any such actions done by school are against articles 3, 5, and 9 of the UN CRC.

1. A school or institution shall not act on behest of a Custodial Parent thereby denying or restricting a child’s right to be in communication with and have access to custodial parent.

3. A school or institution shall not deny to a non-custodial parent information about child’s educational performance, extra-curricular activities, and progress at school, unless a suitable court order exists restricting or denying the same to the non-custodial parent.