You are here: Home » Uncategorized » Feedback on Strengthening the Justice Delivery Process to Rajya Sabha Secretariat

As per this press release dated 3rd Aug 2018 by DEPARTMENT RELATED PARLIAMENTARY STANDING COMMITTEE
ON PERSONNEL, PUBLIC GRIEVANCES, LAW AND JUSTICE, feedback from general public is solicited towards “Strengthening the Justice Delivery Process”.

👉(Read Online eBook): How to Fight and Reduce Maintenance under CrPC 125 and DV Act 👈
Contents hide
1 Points/Feedback on strengthening the Justice Delivery Process
2 Explanations and Reasoning

Full text of press release below:

3. Those desirous of submitting memoranda to the Committee may send/
e-mail the same in English and Hindi to Shri A.K. Sahoo, Addl. Director, Rajya
Sabha Secretariat, Room No. 012, A-Block, Ground Floor, Parliament House
Annexe Ext. Building, New Delhi-110001, Tel: 011-23035365, E-mail:
rs-memocpers@sansad.nic.in. Those who are willing to appear before the
Committee for oral evidence may indicate so in their memorandum. The
Committee’s decision in this regard shall, however, be final. The memoranda
submitted to the Committee shall be treated as confidential.

Note the last date mentioned above is 31 Aug 2018, however as per another advertisement below dated 18 Aug, it could very well be accepted till 1 Sep 2018, since the advertisement appears on 18 Aug 2018, and 15 days time is allowed from date of publication of advertisement.  See advt below: 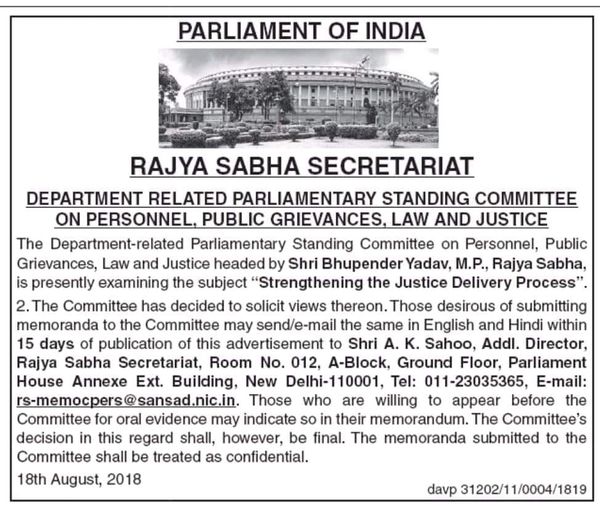 Here are some common points which can be given as feedback to the committee.  You can add yours or change as required, and give your own reasoning too.  Brief points are given followed by explanations later, but any other style can be adopted, too.

Email the points to rs-memocpers@sansad.nic.in giving your full name, address, contact number.  A PDF of the points and explanation below is also given here, which can be sent as attachment in email.

2. Send SMS updates to registered mobile phones of litigants and advocates on record after each hearing informing next date and status of case.

3. Send SMS updates to registered mobile phones of litigants and advocates on record in case presiding office/judge has to be absent from court due to leave/training etc and it is known in advance.

4. All courts need to have mikes on judges’ desk connected to speaker system so that the voice of judge is audible throughout the court hall.

6. Alternative Dispute Resolution Mechanism like Lok Adalat would be more useful if litigants are initially informed in a session how the process works, what to expect.  Even explanatory videos can be created in all Indian languages and uploaded on free sites like YouTube so that litigants can know in advance what to expect.

7. Similarly videos in major Indian languages can be created to explain process and steps involved in a complete trial in various courts like civil courts, consumer forums, family courts, criminal courts, and uploaded on YouTube etc.  The reasoning that such information need not be disseminated because advocates can do it for clients is not a sound reasoning, since for public it is important to know what to expect BEFORE approaching advocate.  Also, some people may want to represent themselves in court as party in person, some people may not be able to afford an advocate, some may need legal aid, and so on.

8. Similarly, the concept of legal aid, who are eligible, how and where to approach to get legal aid, can be explained in videos in major Indian languages so public can access them easily and for free.

1. The delay in Indian justice system are well publicized, however the discussion has not moved beyond well known factors like lack of infrastructure/court halls, lesser number of judges, etc.; without a wider analysis of other factors and an analysis which could connect causes with effects, and measuring which factors contribute to delays and by how much time.  Without doing such analysis, it becomes an exercise in offering excuses and platitudes.  For example, nothing is known behind reasons that though the code of civil procedure mention conducting trial on a day by day or similar basis, routinely dates are given running into several months.  Same is the case in criminal courts, where importance of speedy trial is considered even more important.  In this regard, it is important to compare how justice delivery, hearing dates, and whole case management is done in other countries which are doing much better on disposing off the cases within reasonable time.  Other points which can be compared relate to utility of recording transcript of court proceedings vs recording of statement by presiding officer during cross-examination etc.  It is seen that lot of the delay in court proceedings is due to time consuming dictation during oral evidence, and cross-examinations.

2. Most people in India are now connected to a mobile network, and SMS is a ubiquitous mode of communication which can be utilized to inform public of court hearings and situation where a judge is going on leave on the next hearing date.  It is seen that litigants have to travel long distance to attend a court hearing, and only upon arrival in court in morning of hearing date, they come to know that the presiding officer/judge is on leave.  This is a waste of not only human capital and time, but also resources like wasted fuel, transport costs, lodging costs, and so on.  One can get latest updates via SMS of even cricket scores, so it is not impossible that SMS updates about both leaves of presiding officers, and case hearing status/date cannot be communicated.  It should also be made incumbent upon advocates on record to inform clients whenever a trial/hearing is postponed.  SMS updates are already being sent to complainants’ mobile numbers by consumer forums after each hearing date.

3. Though Indian courts follow the “Open Court” principle, proceedings in most of the Indian courts are unintelligible to public/litigants/advocates who are present in the court hall and far away from the bench. Ref: https://en.wikipedia.org/wiki/Open_court_principle

One chief reason for the same is that most lower courts (except high courts and Supreme court) do not have a mike/audio system. Ref: https://indianexpress.com/article/india/rs-96-lakh-used-to-renew-supreme-court-mic-system-that-few-judges-use-rti-reply-4897408/

It should be mandated that all courts have mike/audio speakers and which are mandated to be used for court proceedings.  Not having them or not using them would directly be against the principle of “Open Court”, and unless a proceeding is being done in camera, there can never be any valid or reasonable objection to the use of mike and speaker system so that the voice of judge/presiding officer is audible in the whole of court.  If the public cannot listen to what is being said, then the proceedings cannot be said to be done in an open court.

4. Suggestion for audio/video recordings of court proceedings have already been approved to some extent.  These need to be followed up and put into practice across all courts of the country.  It will go a long way in creating confidence in minds of public that the justice delivery process is a transparent and open process, and manipulating or perverting it is not easy.

5. The other points relate to educating general public about legal procedures, court trial procedures, legal aid, alternative dispute resolution etc. Video mode of information/education will be most practical because most people can grasp information presented in a well-made video, vs reading content of an article.  Also, even an illiterate person can listen and see a video so in terms of making justice accessible to all, it is a practical idea.  Also the concept of “ignorance of law is not an excuse” is a valid concept, but it also creates a corresponding duty on government to make knowledge and information about law and legal procedures accessible to general public, in an easy and accessible manner.