After catching snippets of news on social media, TV, online news about domestic violence case filed by wife on Somnath Bharti — once law minister in first AAP government in Delhi —  I decided to delve into some of the patterns followed by wives, and also possibly some right ‘moves’ made by Mr Bharti so far.  Let’s start with Firstpost’s rendition of the DV complaint as it unfolds:

👉(Read Online eBook): How to Fight and Reduce Maintenance under CrPC 125 and DV Act 👈
Contents hide
1 Somnath Bharti: A man of unfulfilled potential?
2 Somnath Bharti: The Jedi strikes back!
3 Bring something positive to your fight

In more controversy for ruling Aam Aadmi Party, its MLA and former Delhi Law Minister Somnath Bharti was on Wednesday slapped with notices by Delhi Commission for Women after his wife filed a complaint levelling charges of domestic violence, mental torture, dowry and forgery which the lawmaker has rejected as “baseless”.

Additionally, she also reached the police headquarters to meet police officials regarding her domestic violence case.

Ok. That’s how the script goes for high-profile cases these days.  Don’t go to court or protection officer for filing DV case.  Directly approach the women’s commission (do inform media before reaching there), and just don’t stop at women’s commission.  Directly head to the police headquarters, after all women empowerment is the top agenda for police these days.  Never mind that there is no real IPC crime for domestic violence per se, you can file a complaint for physical assault or other IPC crimes which are common for all public, and not specific to women.  I am sure Mr Bharti’s wife was not planning to file IPC 498A just yet, maybe it’s in plan for the future if he is unrelenting. 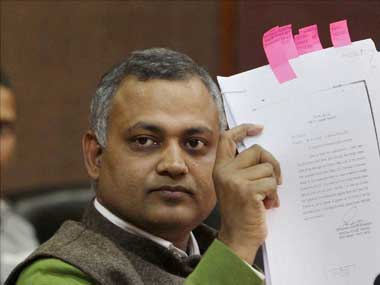 “Summons have been issued to Bharti and he has been asked to appear on 26 June,” said Barkha Singh, chairperson of DCW.

Singh added that Lipika has been living in Dwarka separately for the last three years and Bharti used to visit her.

“She approached us this afternoon and lodged a complaint alleging assault and domestic violence by her husband Somnath Bharti since 2010. We have issued notices to Bharti asking him to appear before us by June 26. She now wants an end to the torture,” said Barkha Singh.

I did catch Ms Barkha Singh espousing her wisdom in form of commentary on TV, and above news report too matches with that.  Basically, she started off with what were some of the allegations by Mr Bharti’s wife, but a few sentences thereafter she was stating the allegations not as allegations, but as if the allegations were already proven true and she herself was the complainant!  I am glad some sensible people in Law Ministry decided against giving full powers of court to women’s commission, else we don’t know what would have happened to people like Somnath Bharti yesterday!

As per her complaint, Lipika works in a multinational company and married Bharti in 2010. Bharti had also demanded dowry and a car, said Singh.

Alright! The script is ready for possible IPC 498A too.  How can a complaint be filed without mention of word dowry and dowry harassment somewhere?  So the stage has been set.

READ:  Does Karnataka HC judgment allows for DV complaints on wives by husbands?

It is said that sometimes a woman marries a man for his potential (but mostly they marry only one who is earning more and successful).  Some of the allegations point towards that as the reason rather than domestic violence and such things.

“She said Bharti had lied to her. Before marriage, Bharti had said that he owned an international law firm but later she realised that he did not. She has also complained of physical and mental torture. After making the complaint, she is scared,” the DCW chairperson added.

Another news on TV said that his wife alleged that she hoped things will become better once he became a minster.  Really?   Does it make any sense!  What makes more sense probably is that his wife could put up with other things gladly had Mr Bharti been made a minister, but that did not happen in the second AAP government.  Elsewhere the news says:

Singh added that Lipika has been living in Dwarka separately for the last three years and Bharti used to visit her.

Maybe I am a bit confused or maybe with abundance of common sense.  How does a man torture a wife and children physically if he’s only been visiting them occasionally over the last 3 years?  Like he will be going there with a plan: “Today I have my family visit lined up from 3-5 pm.  5 slaps to wife,  couple of beatings to each of the children, some verbal abuses.  Ok, that’s about enough for 2 hours!”  How can a wife get physically tortured by husband who is not staying with her at all!

The following comment by Mr Bharti seems to suggest that his wife is not happy with his profession of politics, and his financial standing.  But how does that become domestic violence and torture?

“For 5 years she is making a demand that I have to choose between my mother and her. I cannot fulfill this demand, where should I send my mother?” he asked, adding that he doesn’t have enough money to run two houses.

“Her second demand is that I should leave politics, because I don’t have a private life being in politics,” he said.

Somnath Bharti: The Jedi strikes back! That’s what I call a masterstroke.  Wife alleges domestic violence, hit back with allegation that she is stopping you from serving your mother, and motherland!  That can dispel negativity in minds of most people, because most Indians have a soft and venerated feeling towards mothers, and for those who are bit more wife-oriented – maybe loyalty and service to motherland will melt their heart!  You can’t go wrong with that 1-2 combo strike!

“For 5 years she is making a demand that I have to choose between my mother and her. I cannot fulfill this demand, where should I send my mother?” he asked, adding that he doesn’t have enough money to run two houses.

One of the most famous dialogues in Indian cinema is about loyalty and service to one’s mother.  From movie Deewar (1975):

Vijay:Today I have got money, a bungalow, car, servants, bank balance … what do you have?

Ravi: I have my mother!

Which brings me to the lesson which can be learnt by husbands from Mr Bharti’s Jedi like strikes in the face of seemingly insurmountable obstacles put in his path by wife.  What positive things are you doing in life, or what is the positive stand you are taking?

READ:  Innocent until proven guilty is the law, use it

In practical terms, many husbands who face false DV and other cases from wife are doing just the opposite.  They are willing to let go of parents/mother, and take a separate house under wife’s pressure.  Some are pressurized to take a house near wife’s parents’ house.  Ultimately, the onslaught never stops, and one day the man faces the same DV and other cases what Mr Bharti is facing as of now.  So what’s the point of doing all that sacrifice and drama, if the end result is going to be the same?  Once a man bows down to patently unreasonable demands, it is never ending saga of frustration and humiliation.

Bring something positive to your fight

There is one thing which husbands facing false cases need to learn from politicians.  It is grit in the face of obstacles, and constantly seeking positive actions in the midst of negativity around.

Many Indian politicians have multiple criminal cases filed against them.  They never stop and lament for a moment – “What will happen to my parents.  We have never had police come to our house in our family ever!”  Instead their response is more of a conqueror and they declare confidently that all these criminal cases are filed as political vendetta by political opponents.  More the criminal cases, better the politician since it’s a sign that there are many opponents jealous of his success and they want to bring him down by filing false cases!  In fact, Mr Somnath Bharti has himself been in limelight for the wrong reasons for his alleged previous skirmish with African women:

This is not the first time Somnath Bharti has courted trouble. In the past, he was accused of molesting African women during his midnight-raid of a sex and drug ring operating out of the Malviya Nagar neighbourhood.

His nightly raid at Khirki extension was controversial for sure, but not everyone agrees that his actions were dishonest or with bad intentions, even if the execution can be faulted.

Now many men will be asking: What positive thing I can bring to my fight?  I am only a XYZ, in so and so profession.  I have old parents etc etc.

How about dignity, and self-respect?