You are here: Home » Will the real opposition to dowry stand up please?

This is the response received to an RTI application filed on Women and Child Development Ministry.  According to this RTI response, WCD ministry has not spent a single Rupee on any advertisement campaign against dowry, or extravagant marriages in Apr 2009-Mar 2010. 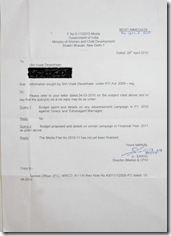 RTI response is also given in PDF format below:

This is the same WCD ministry which had bungled and carried out an advertisement issued on the occasion of the National Girl Child Day that carried a photograph of the former Pakistan Air Force chief, Tanvir Ahmed Mahmood.

So it seems they WCD does not spend any money on reducing dowry and extravagant marriages… and when they do spend money on a women’s issue, it is bungled so badly that Prime minister’s office (PMO) has to issue an apology on behalf of WCD.

READ:  Woman pesters her own parents for dowry, rebuked