You are here: Home » WCD does not spend any money against dowry or extravagant marriages!

This is the response received to an RTI application filed on Women and Child Development Ministry.  According to this RTI response, WCD ministry has not spent a single Rupee on any advertisement campaign against dowry, or extravagant marriages in Apr 2009-Mar 2010. 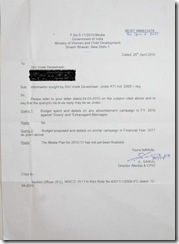 RTI response is also given in PDF format below:

So should we not make sure that there is accountability from a ministry which purports to work for women empowerment, but spends money and time on making goof-ups like carrying ex-Pakistani air chief’s photo in its advertisement on National Girl Child Day.